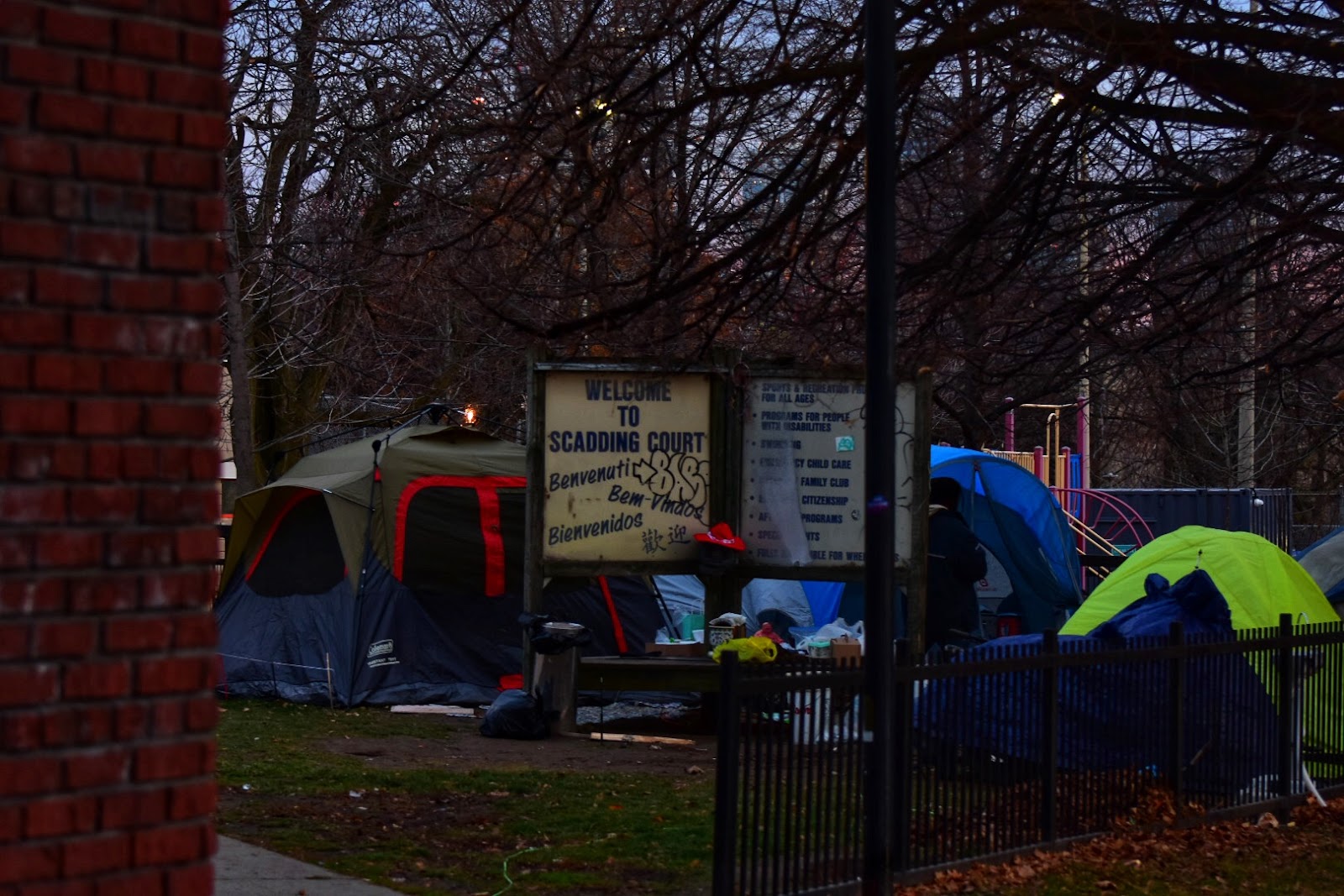 According to Homes First, an organization that provides housing for “people with the fewest options in Toronto,” there are over 8,700 homeless people in Toronto on any given day. But with Covid-19 lockdown enacted, staying home is literally impossible for unhoused people in Toronto. So far, from January 2020 to June 2020, 60 homeless people have died. With winter approaching and COVID-19’s second wave and lockdown, people worry that those numbers will go up.

Andrew Boozary, executive director of population health and social medicine for the University Health Network, states that “...[The City] has failed on housing” in response to seeing people “in tears” at having a bed of their own for the first time. Boozary fears that Toronto might face it’s worst wave of homelessness due to COVID-19. To add onto that, Toronto has just proposed a bylaw that will ban camping in parks after midnight, a bylaw that when enacted, will disproportionately affect unhoused people.

Many people facing homelessness will try to turn to homeless shelters. During Covid-19, this may not be a safe option for many unhoused people. Even a group of 14 homeless men and women claim that “it feels safer to live in a tent than to stay in shelters or hotels far from services during the COVID-19 pandemic.” Selwyn Pieters, the lawyer for one of the group members, states that the City threatening to remove the homeless people from parks violates their charter rights. The fears of the group are justified. There have been over 600 cases of  Covid-19 and 7 deaths in the shelter system, and 7% of homeless people who died this year, died due to Covid-19. It has also been reported that there is not enough space for social distancing in shelters, as the City requires spacing between beds to be only 2.5 feet in shelters.

Additionally, unhoused people are facing the annual struggle of winter. Many people facing homelessness, similar to the group from earlier, have set up camps and are living outdoors. They are scared to retreat into shelters that put them at a higher risk of contracting coronavirus. In the early winter months of 2020, right before the pandemic hit, 29 homeless people died. Citizens are angry about the lack of consideration and help available to the homeless population. Last Sunday, activists protested outside of Mayor John Tory’s condo building. On the snowy day, angry Torontonians built “foam domes” for homeless folks outside. They were made of just two pieces of insulated foam and equipped with a carbon monoxide alarm.

Khaleel Seivwright had a similar idea. He has been building tiny homes, big enough to warm someone using only the body heat they produce. The houses are on wheels to make them portable, built out of wooden beams, and insulated with insulation that would also be used in a normal home. Khaleel confirmed that the houses will be equipped with smoke detectors. The City, though, is not happy about this solution. “[The City] told me to stop making them and that I can't put them on city property and that they will remove them without warning and charge me for the cost of their removal,” Khaleel told CTV News. Khaleel is currently looking for any private property to place the shelters on. Although all of the reasons for The City’s distaste towards the houses are unclear, The City had said that the shelters weren’t considered safe because of the lack of fire alarms.  CTV News was quick to point out that Khaleel had already mentioned that the wooden structures were built and set out with functioning fire alarms, as well as carbon monoxide alarms. The City stuck with their words and claimed that the structures are still potentially dangerous because they hadn’t been inspected by Toronto Fire Services. Khaleel told CTV that he will have every structure inspected independently.

Harbord and the homeless population of Toronto are not strangers. In 2018, the neighbouring area of The Annex introduced a more permanent style homeless shelter. The Davenport Road Women’s Shelter has health care access and personal beds for the residents are available inside the home, located at 348 Davenport Road. The home can only house up to 90 people. Additionally, Harbord student Yamin Katz, whose mother works with homeless people had this to say. When asked about the city's response to the tiny homes, she said that she doesn’t believe that the city should move the homeless: “Where would [the homeless population] go? People don’t like tents in the park, but it’s the only option for most of these people.” When I asked Yasmin what she proposed we do to help shelter unhoused people, she suggested housing people in empty mansions in the wealthy area of Rosedale. Others have had similar ideas; recently, a petition to turn the enormous Rogers Centre and Scotiabank Arena into shelters for the unhoused population has been spreading across social media. At the time of writing, over 3,000 people have signed this petition.

If you are struggling with homelessness this winter, call 311 for assistance. You can sign the petition to use the event venues as pop-up shelters here: https://www.change.org/p/rogers-communications-turn-the-rogers-centre-and-scotiabank-arena-into-pop-up-shelters?recruiter=595780454&recruited_by_id=39131db0-7772-11e6-a454-f9b2be5640a8&utm_source=share_petition&utm_medium=copylink&utm_campaign=petition_dashboard. 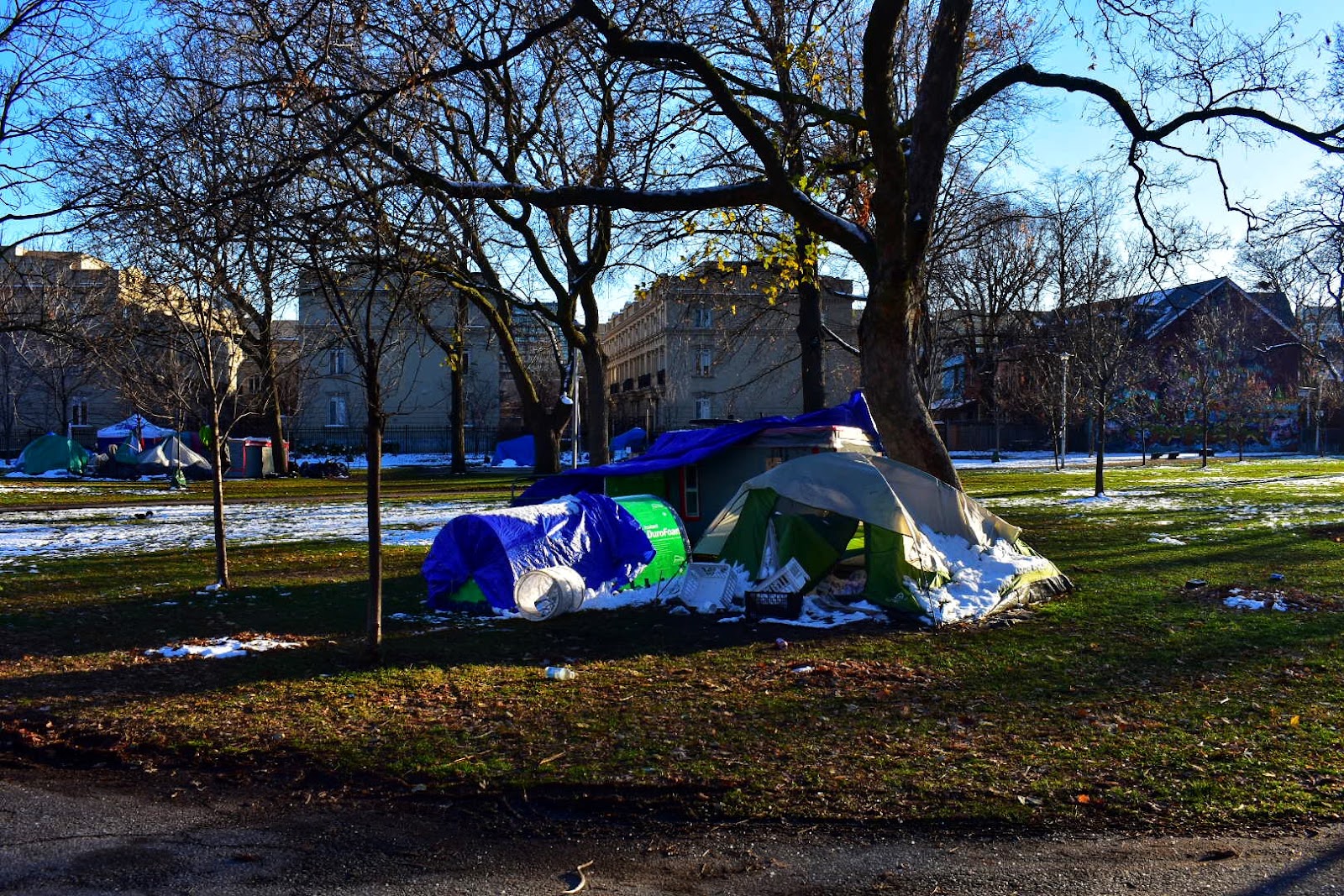